From the Media Finder toolbar, click the + icon. This will open the Edit Audio window.

Importing From A File

Click the Folder icon from the top tool bar once inside the Edit Audio window.
You can then select the file to import from your hard drive.

Once the file imports, you can then set cart details such as Title, Artist, Type, Category. 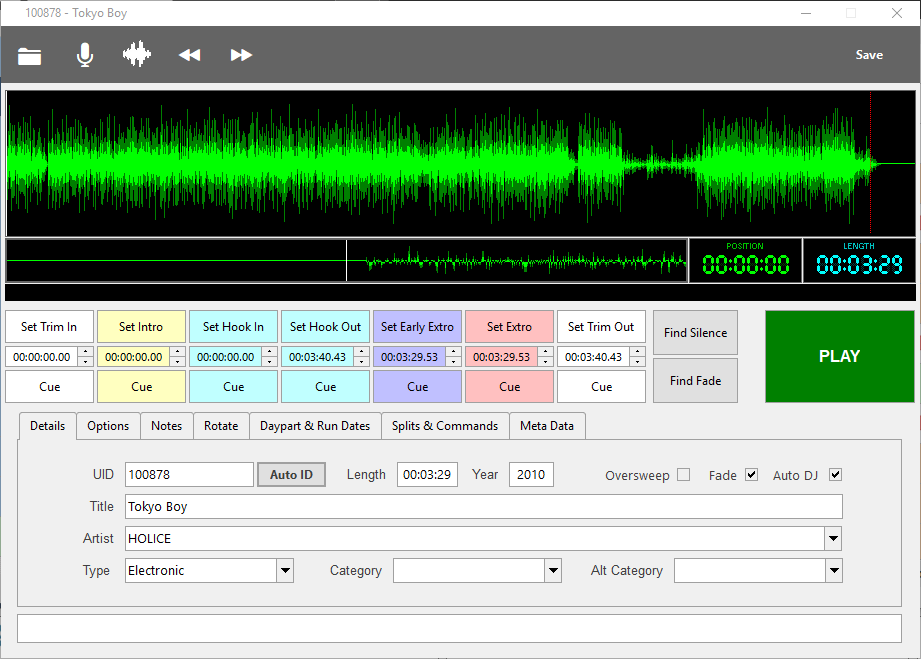 You can set markers on a piece of audio which will tell PlayoutONE certain things about an item and how to behave when playing the item from a playlist. Each marker is set by playing or positioning the white play position marker on the waveform.

When this marker is where you would like it to be you then click the ‘Set’ button for each marker. So if you wanted to set the intro marker you would click the ‘Set Intro’ button. You can then tweak these values by clicking the up and down arrows on each marker.

Trim In and Trim Out

These tell PlayoutONE where to start the audio from when loading it up ready for play and also when to eject the audio at the Trim Out point. This enables you to avoid any silence either side of the audio. You can click the ‘Find Silence’ button to automatically find these points. If you wish to change the threshold that this setting works at then you can find more in the Settings section.

This is an indicator of where the intro ends on a piece of audio. So for a song you would set this at the point where the vocals start. This allows you to see how long you have to talk for if you want to introduce the song over the beginning of it and it also lets PlayoutONE know how to calculate its Oversweeps. You can find out more about the Oversweeps in the Playlist section.

Hook In and Hook Out

These are for playing just the hook of the audio. So for a song the catchy bit like the chorus or something similar.

The point where the song has finished but is not fully complete. It’s from this point that the next item in the playlist would be started. Also known as a crossfade point. You can set this easily by clicking the ‘Find Fade’ button to automatically find this point. If you wish to change the threshold that this setting works at then you can find more in the Settings section.

This point is only active on items marked as Oversweep (see below) and determines where the next item will be played (if it has an intro). An example of where the Early Extro may be useful is when you have a music imager that has 20 seconds of music clips followed by a 10 second dry liner. We would like the intro of the next song to underlay the music imager but there is a problem. With a normal oversweep, if the intro of the next item is long enough then it could start whilst the music imagers are playing. By setting an early extro after the music imagers, this forces PlayoutONE Pro to not start the next song will not start until we reach the early extro point.

The item will be treated as an Oversweep. An Oversweep is audio that is played and the item following it is also played but the precise second the following item is played is calculated based on its Intro marker.

So for simplicity if an Oversweep item of 10 seconds in length is followed by an item with an intro of 5 seconds then the Oversweep will play for 5 seconds and then the following item will play as the Oversweep. Oversweeps are typically used with Sweepers where you want the sweeper to overlap the intro of the song playing straight after it.

PlayoutONE uses this to know how to end the item. If Fade is ticked then the item will be faded to the fade settings. If un-ticked then it will not fade at the cross fade point and will play till its end.

Let the AutoDJ know that it can choose this item.

You can also click the ‘AutoID’ button and this will again be automatically filled in based on the very last UID currently in the system.