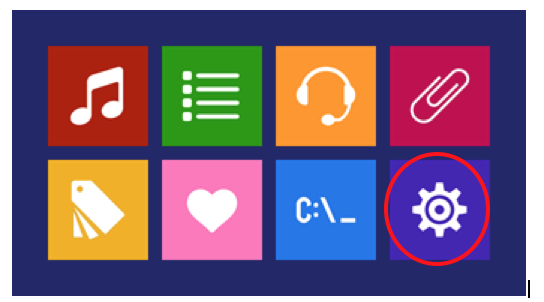 PlayoutONE can be configured in many different ways and nearly all of the settings can be found in the settings window.

You get to the settings by clicking the cog from the submenu toolbar.

This is the data folder where the PlayoutONE database resides. If you wish to run your system over a network you will need to copy the database to your server and then set this to point at the data folder.

This is the folder that will store any audio that PlayoutONE uses. Consolidated audio is placed here and so are files which have been normalised or anything recorded directly into PlayoutONE like voice tracks and audio recorded via the edit audio screen.

This folder is a central repository for all your playlists. You can save and load playlists from wherever you want but this is the standard folder where pre-built playlists can be stored and loaded to the system.

Import Audio to the Audio Folder

This instructs PlayoutONE to store all audio in the audio folder. If you decide to set this after importing files then you can always get existing audio copied to the audio folder by clicking the ‘Consolidate Audio Now’ button.

Don’t check for audio outside of the Audio Folder

Instructs PlayoutONE to not use the original audio file as a backup should the file not be in the main audio folder.

This is the name that appears on the top of your Playlist print out.

This appears on the top of your Playlist print out

Trim In, Trim Out and Fade Out:

These are the thresholds in decibels that PlayoutONE observes when detecting silence and the extro / fade point of audio.

When a crossfade occurs between playlist audio PlayoutONE uses these settings to know how to affect the fading between audio.

Fade Time is the amount of time in milliseconds that it will take for an item to fade beyond its extro / fade point.

Pre Fade is the time in milliseconds that it will take just prior to the extro / fade point.

Pre Fade to is the volume percentage that PlayoutONE will fade to prior to starting from the extro / fade point.

Determine that audio fades if difference between fade point and trim out are greater than X:

This setting in milliseconds tells PlayoutONE how to determine if audio fades or has a cold / short end to it. This is used when importing via the mass importer or when the ‘Find Fade’ button is clicked in the Edit Audio window.

Default volume level for items without a type:

When time stretching allowed audio no more than X:

When the RunToTime command is used, PlayoutONE will fade items that are fade able by no more than the value set here.

Used if you want to output the current playing and coming next information to your hard drive, network or FTP location.

The folder where you want the billboard.txt file to be created.

This allows you to build your own custom billboard script using the parameters available. If you need to reset this script then just clear everything out of the script box and save your settings. The next time you open the settings menu it will be reset to the de fault.

Send Billboard to server via FTP

Instructs PlayoutONE to send the billboard.txt to an FTP server using the following credentials:

The port used by your FTP server. Usually 21

The folder you have access to on your FTP server where the billboard.txt file is to be put.

To check that your credentials work press the ‘Test FTP’ button.

Set the colours for various elements of the PlayoutONE interface. This allows you to personalise your PlayoutONE system if you wish to.

Prefix voicetracks with up to 3 characters when recording and committing them to the system.

Allows you to set the specific type you would like to use for voicetracks.

Allows you to set the specific type you would like to use for commands.

Allows you to specify how much of the song you are voice tracking out of you want to hear.

When committing a Voice Track, PlayoutONE will automatically normalise the file.

With this setting enabled you get the following:
1) Start voice tracking.
2) start recording.
3) Start the next song
4) Finish

The folder where you would like automatic backups of the database to be stored. Backups are stored using the date as the filename in backwards format YYYYMMDD.

How many days between backups and at which time you would like this backup to be performed.

You are notified of the most recent backup at the bottom.

PlayoutONE has a flexible audio system and allows you to set each player to its own sound device or have players on the same devices. All available audio devices and outputs are shown in the drop down boxes.

This is the device used for cueing, pre-fading or editing audio. There is no visible player for this device which means players 1 to 4 are free for your output.

This is the device PlayoutONE uses to record live audio into the system like voice tracks and in the Edit Audio window.

When you choose the Record Device this drop down is a list of available channels supported on the selected device.

When you connect to an external stream on the internet this is the device that will be used to play out the audio being streamed.

This device can be muted and unmuted through the commands within PlayoutONE. Useful for bringing in Live News and then muting again.

Use ASIO as well as DirectSound (Requires Restart of PlayoutONE)

When this is ticked it will tell PlayoutONE to interrogate ASIO enabled devices installed on your system.

NOTE: If you do want to use ASIO enabled devices then make sure you restart PlayoutONE when you set this option.

Items to Keep on the Playlist

When using the AutoDJ this setting is used to tell PlayoutONE how many items to always have in the playlist.

This tells PlayoutONE to monitor for special key combinations which activate various functions in the software. This is especially useful for using configurable external keyboards. See Appendix A for a list of key combinations.

If your playlist is empty then turning this option on will make sure that in an emergency the AutoDJ will be activated to prevent any silence.

Auto load the next Playlist when items left reaches

This is the number of items on the playlist, when reached, will trigger the loading of the next playlist from the playlist folder based on the date and time. Files in the playlist folder will be found if they have the filename that follows the pattern YYYYMMDDHH.dpl so YYYY is the year MM is the month DD is the day and HH is the hour.

This option instructs PlayoutONE to start playing the playlist which is loaded 10 seconds after it starts. Situations this would be useful in are crashes where perhaps a hardware error or power outage has reset your PC.

If you set PlayoutONE to start when the machine reboots then after 10 seconds it will begin to play the loaded playlist. You would have to run this in conjunction with the Auto load the next Playlist…. option. Tick the Use Current Hour Box to have the current hour’s playlist loaded rather than the next hours.

This is the time in seconds that the players use to cue up the next item. So if you set this to 10 and the current item is 10 seconds or less away from the extro / fade point then the next item will be loaded / cued up.

Fill Set Type / Fill Set Category
When using the RunToTime command, if the playlist is short, PlayoutONE will fill from these categories.

IP or Hostname of the machine to connect to, to receive split commands

Port of the machine to connect to, to receive split commands

Turns on the ability to receive the split commands.

NOTE: The toggle switch to turn off split commands from the main toolbar only de-activates or activates for the current session. If you restart PlayoutONE then the status is read from this setting.